Hedge laying is a traditional method of managing hedgerows which has been practiced for hundreds of years. It is a technique which encourages the hedge to rejuvenate from the base.

Whilst it can look quite drastic to start with it provides a dense habitat for wildlife, and encourages fresh growth that starts a new life cycle of the hedge.

It is such an important method of preserving hedges, that it has its own National Society with Championships run up and down the country from September through to February. The picture shows the hedge that has recently been laid at Sandy Lane Local Nature Reserve, Bramcote.

A length of nearly 100 metres has been laid by local contractor GH Platts Services. The manager comes from a long line of traditional agricultural workers and was taught the skill many years ago by an uncle. He was pleased the project gave him the opportunity to continue practicing the family tradition.

The work has been very well received by local residents using the path to access the Nature Reserve. 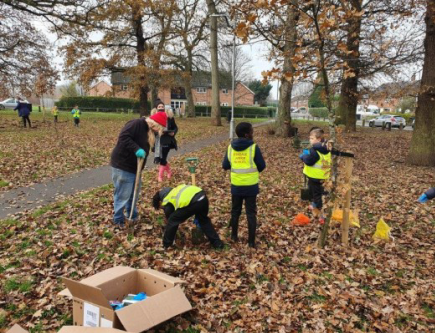 Over the last few months we have been engaging with schools and community groups to deliver small “urban rewilding” projects on our parks and open spaces.  By introducing native plant species and changing management regimes, we hope to provide new habitats for wildlife.

Schemes include include work at Bramcote Ridge where the Friends Group have carried out plug planting with spring flowering woodland plants.

Where are we based?