29/10/18 – THREE ICONS of Beeston have been given a lasting tribute in Beeston Town Centre as part of the Beeston Street Art Festival. The late actor Richard Beckinsale, the late singer/songwriter Edwin Starr, and fashion designer Sir Paul Smith were spray painted by international street artist Zabou to celebrate the influential creatives of Beeston.

The street art on Station Road was commissioned by Broxtowe Borough Council as part of its Beeston Square Redevelopment project. The original funding was provided by Henry Boot plc. as part of Beeston Square Phase 1. The Council chose to use the remaining £8,179 of the fund for the street art. 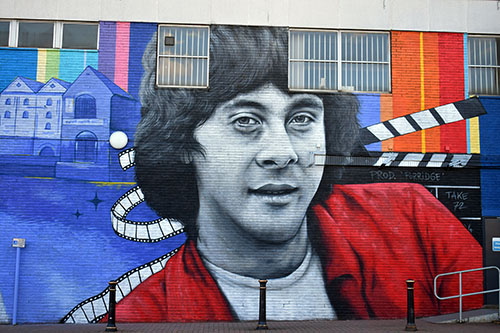 Deputy Leader, Councillor Mel Crow said, “The street art has been a real talking point in Beeston and I’m delighted with the fantastic response to it. I think anyone who sees it will agree that it is visually stunning and Zabou has done the town proud.  Together with the rest of the street art which has been completed as part of the Street Art Festival, we have showcased the creativity that Beeston is known for and I’d like to thank the many  local people who helped make it happen.”

Jeanie Barton, Organiser of the Beeston Street Art Festival Team, said, “After organising the inaugural Beeston Street Art festival in June I was delighted Broxtowe Council voted to spend their remaining Henry Boot Art Fund on commissioning the wall.  Zabou has created a massive mind-blowing mural featuring our most famous local creatives.  Crowds have been gathering already and Kate Beckinsale shared a progress shot on Instagram praising the work and Beeston.  I’m delighted the art is already such a huge attraction for my home town.” 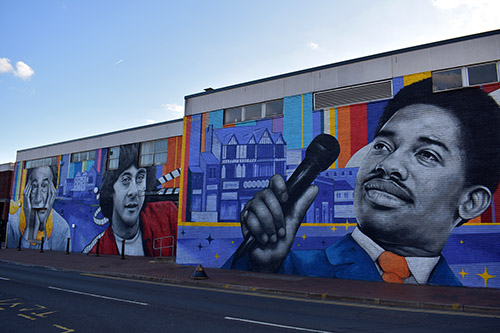 Zabou said, “It’s always amazing to have very positive feedback and I think the celebrities are speaking to a lot of people because they’re really loved around here, some people are emotional and it reminds them of their childhood. It’s really nice. This is my last really big mural for the year, as I’ve been non-stop travelling and painting for the last three months. So I’m looking forward to my bed. I won’t be able to rest too much though as the next thing for me is a group show at the Saatchi Gallery in London in December so I’ve got to prepare for that.”

The redevelopment of Beeston Square began in 2013 and work on Phase 2, which includes 120 new homes, a cinema and a number of new food and drink outlets, is set to begin in 2019.

For more information on Zabou, please visit her website.

Link to Our Previous Site

All the old pages, comments and posts are still available.

Where are we based?